Great breakfast from the b&b then hit the road 8ish. Really pleased it was overcast so a bit cooler.

I’m the morning I met Andrea who is competing in the TAWR along with her husband; they are riding their own races. Andrea has been camping each night. We had a great early lunch together at Glenveagh national park. Later on down the road I met her again – her gear cable had snapped. She had brought a spare cable and was going to have a go at the repair. Later on I saw she had checked in at a nearby campsite so I hope all went ok.

I also bumped into Tomas, a courier from London on a very nice Canyon bike.

And then later on at the top of a pass I met Joshua from Sydney. He had set up a bivvy but giving up on the camp spot as he was being attacked by midges.

We rode on through the countryside at night – good fun.

I had to get the miles in so rode until quite late and then eventually found a spot to bivvy. I put on my midge head net (SO glad I bought it!) got into the bivvy bag and even without airmat or pillow I soon fell asleep.

Despite being in hotel last night I didn’t get any sleep. The glow of the sun exposure and tired muscles keeping me awake. Had a nice chat with the night porter the who had lived in Tottenham for 30 years. He brought me a breakfast at 5am which took a while to eat and I didn’t get ready and going until 6:30ish the night porter stood at the hotel entrance, watch me unfold and waved me off down the road. The first part of my ride was to cycle the 50km to Derry Peace Bridge. I thought I would make it by 9 but was quite a bit later due to there being a lot of hills.

After cycling to the centre of the bridge (check point 1) I found a petrol station that was serving food, and had two fried egg rolls – my first hot food since breakfast yesterday.

The road out of Derry was not very cycle-friendly – having the option of lurking at the left hand of the car lane with fast traffic, or cycle along a badly surfaced hard shoulder. However, it wasn’t long before the coastline came into view, making things a lot better.

After a while the road turned inland and upwards, climbing up and giving a great view of the coastline. But it was steep and there were large chunks where I had to push the bike up. The next couple of hours offered lots of short steep hills and amazing views.

I heard a rattle coming from the front of the bike and stopped to discover the mounting bracket for my front light had snapped. Some sheep came over to watch me fix it with a bit of tape.

On the road again and low on water I passed through a village and spotted Julie who I had met yesterday and we caught up. I had a lunch at the pub.. ravioli and chips (piling on carbs!) – the ravioli was amazing.

A short while later I bumped into Iona who was planning to have a catnap. Both Julie and Iona had pressed on to Derry yesterday and when they arrived nothing was open so they shot through and bivvied and had uncomfortable and brief sleeps.

Cycling around Malin Head was amazing. The route stopped short of the view point at the top so I added a hundred metres so I could catch the view.

By then it was around 5pm. I aimed for a BnB on the route which I could reach by 11pm.

Well at least that was the plan. I didn’t count on Mamore Gap being such a steep or high climb. It just kept going up. Really beautiful though. And the downs were as impressive as the ups.

I then had to press on quickly to make it to the BnB. When I arrived I was presented with some scones and a pot of tea. Really welcome!

In other news: My clothes stink! END_OF_DOCUMENT_TOKEN_TO_BE_REPLACED

Day one went well. No aches or pains. Quite a few hills. Felt sick and had a severe headache from 2-4 pm because of the sun and heat(!) but felt better as soon as it cooled down. Fell over the bike whilst reversing it to take a photo of a cow. Bike and rider ok. Cow scarpered; no photo. Met lots of nice riders on the way. I think we’re like the cool kids at the back of the bus. Already regretting decision not to bring deodorant. Checked into hotel at planned time. This is as far as my planning went. From now on I’ll be ad-libbing it. Tomorrow to Derry and then onto the transatlantic way. Not looking at the weather forecast as there isn’t any point!

A short video of the day before the race: From the 7th of June I’ll be cycling in Ireland, competing in the Transatlantic Way Race. I hope to post a few updates on this site. You’ll be able to follow my progress here and here – I’ll be the dot at the back. END_OF_DOCUMENT_TOKEN_TO_BE_REPLACED

Changing the rim on a Brompton rear wheel.

I made some new wheels for my bike that glow green: 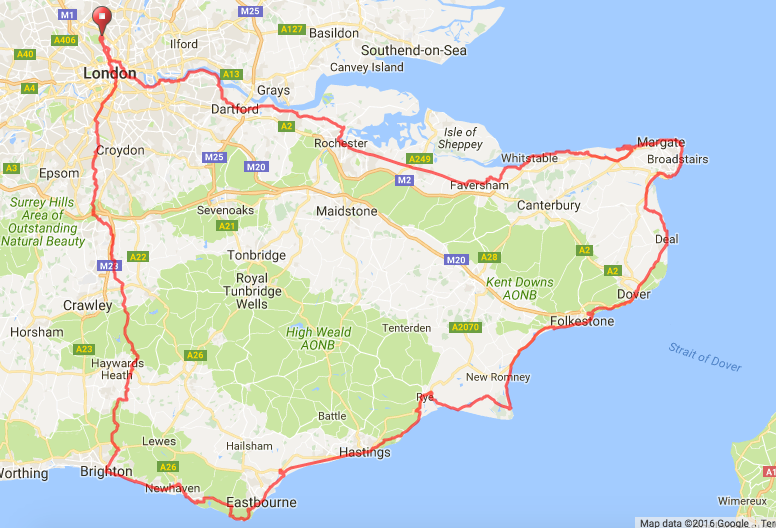 Yesterday I completed this year’s Festive 500 – an annual challenge set to the cycling community by the cycle clothing company Rapha. The challenge is for individuals to complete 500km (310 miles) of cycling over the eight days between Christmas Eve and the end of the year. END_OF_DOCUMENT_TOKEN_TO_BE_REPLACED